Posted February 24, 2017 by Premier Disability Services, LLC®
Share
0
Tweet
0
Share
0
President Donald Trump’s federal hiring freeze may exacerbate a backlog of claims for Social Security Disability Insurance (SSDI) and Supplemental Security Income (SSI) that has grown so large that an average case takes more than a year to be heard in front of a judge.

“These are people who are desperate,” Judge Marilyn Zahm, president of the Association of Administrative Law Judges union, said. “There may be a hiring freeze on federal employment, but there’s no freeze on people getting older, people getting sicker, people having injuries and accidents, and people needing disability insurance.”

The amount of beneficiaries in the program has grown significantly in recent years. Whereas fewer than 2.5 percent of working-age citizens received benefits in 1990, more than 5 percent did in 2015. Last year the Social Security Administration announced that it wanted to grow the ranks of judges to 1,900 by the end of fiscal year 2018 to accommodate for the increasing number of applicants.

That may be impossible now that President Trump, in one of his first executive actions, has imposed a federal civilian employee hiring freeze. President Trump’s order allows agencies to exempt staff needed for “national security or public safety responsibilities,” and also authorizes the director of the Office of Personnel Management to grant exemptions. The order further requires the Office of Management and Budget to develop a plan within 90 days for shrinking the workforce, and states that the blanket freeze will expire once that plan is implemented.

Judge Zahm said that many judges have been working extra uncompensated hours every day to try to get through the outstanding cases, some of which require reviewing over 1,000 pages of medical records as well as experts’ assessments. “This is not a job where you should be doing slapdash work,” she said. “People’s lives, livelihoods, are at stake.”

Posted February 17, 2017 by Premier Disability Services, LLC®
Share
0
Tweet
0
Share
0
In late 2014, after nearly a decade of lobbying from disability advocacy groups, Congress passed the Achieving a Better Life Experience (ABLE) Act, creating a tax-advantaged account for people with disabilities. Money in an ABLE account grows and can be spent tax-free on qualified expenses such as medical treatment, transportation, housing, education and assistive technology.

Prior to the ABLE Act of 2014, Americans with disabilities who had more $2,000 in their name would lose eligibility for government benefits such as Medicaid coverage or Supplemental Security Income. The total annual contribution limit for an ABLE Account is $14,000, in keeping with the federal gift tax exclusion limit.

To qualify, the beneficiary of an ABLE account must have become blind or disabled before age 26 and meet other criteria for documenting a severe disability. The required age of onset may change in the future, however. “There’s lot of activity and support that would take it from [age] 26 to 46,” says Mary Morris, CEO of Virginia529 College Savings Plan, which launched Virginia’s ABLE plan last month.

Additionally, fees on ABLE accounts may vary by state. For instance, Ohio charges a $2.50 per month maintenance fee to Ohio residents and $5 to residents of other states. In contrast, Virginia’s monthly fee is $3.25 per month regardless of residency, and that fee is waived if you keep an average daily balance of $10,000 in your account. The maintenance fees cover the cost of administering the program, and fees for the underlying investments are an additional cost.

While ABLE accounts have the potential to help millions of Americans with disabilities, some people may still choose to set up a special needs trust, sometimes called a supplemental needs trust, or take other planning steps as well.

The Decline in Earnings Prior to Filing a Disability Application 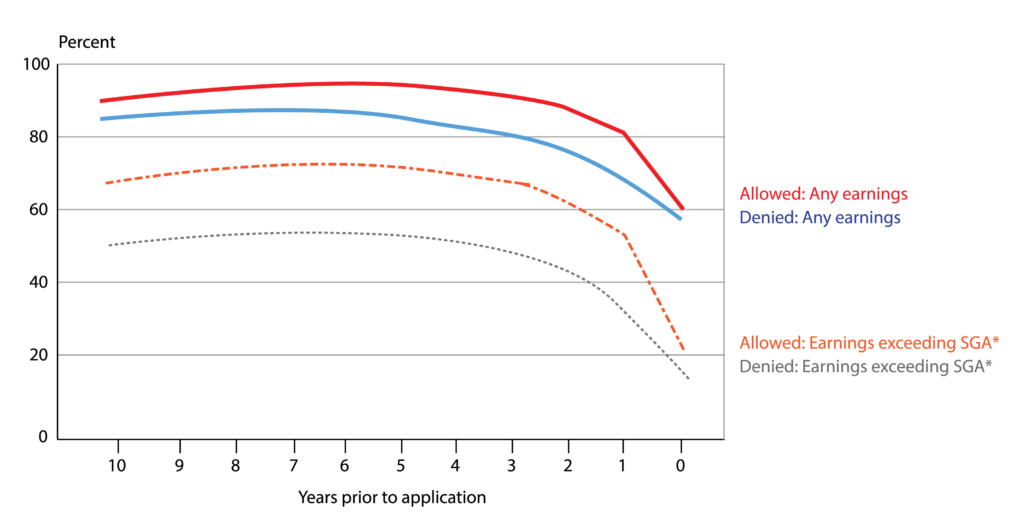 The study demonstrates something that’s obvious at ground level — for most disabled people, disability isn’t something that happens all at once. It comes on over the course of years. Often it’s more than one thing that disables a person. People try hard to fight off disability. Often they wait a considerable period of time after stopping work altogether before filing a claim. People don’t like to have to concede that they’re disabled.